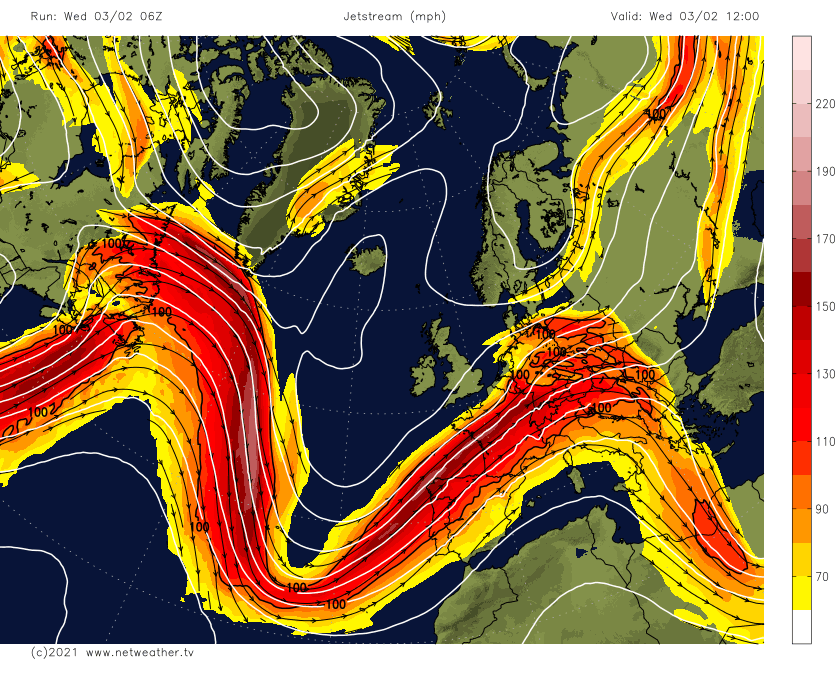 The jet stream is a narrow, fast, upper atmospheric wind current, flowing quasi-horizontally at high altitudes around Earth. By definition, the wind speed should be higher than 57 mph (92 kph) for jet streams, although the term is sometimes also erroneously used for all upper-level winds. The jet stream may extend for thousands of miles around the world, but it is only a few hundred miles wide and less than a mile thick. The wind speeds in the core sometimes can reach 200–300 mph (322–483 kph). These wind speeds within the jet stream that are faster than the surrounding regions are called jet streaks. On average, the jet stream flows from east to west, but it often meanders into northern or southern moving loops. Jet streams occur in both hemispheres, but the Southern Hemisphere jet streams show less daily variability. Jet streams can be

detected by drawing isothachs (the lines connecting points of equal wind speed) on a weather map.

Jet streams form in the upper troposphere , between 6.2–8.7 mi (10–14 km) high, at breaks in the tropopause, where the tropopause changes height dramatically. Jet streams are located at the boundaries of warm and cold air, above areas with strong temperature gradients. For example, the polar front, which separates cold polar air from warmer subtropical air, has a great temperature contrast along the frontal zone, leading to a steep pressure gradient. The resulting wind is the polar jet stream at about 6.2 mi (10 km) high, reaching maximum wind speed in winter. Sometimes the polar jet can split into two jets, or merge with the subtropical jet, which is located at about 8 mi (13 km) high, around 30 degrees latitude . A low-level jet stream also exists above the Central Plains of the United States, causing nighttime thunderstorm formation in the summertime. Over the subtropics, there is the tropical easterly jet, at the base of the tropopause in summertime, about 15 degrees latitude over continental regions. Near the top of the stratosphere exists the stratospheric polar jet during the polar winter.

Jet streams are well known since World War II. Detailed knowledge about the jet stream's location, altitude, and strength is essential not only for safe and efficient routing of aircrafts, but also for weather forecasting .