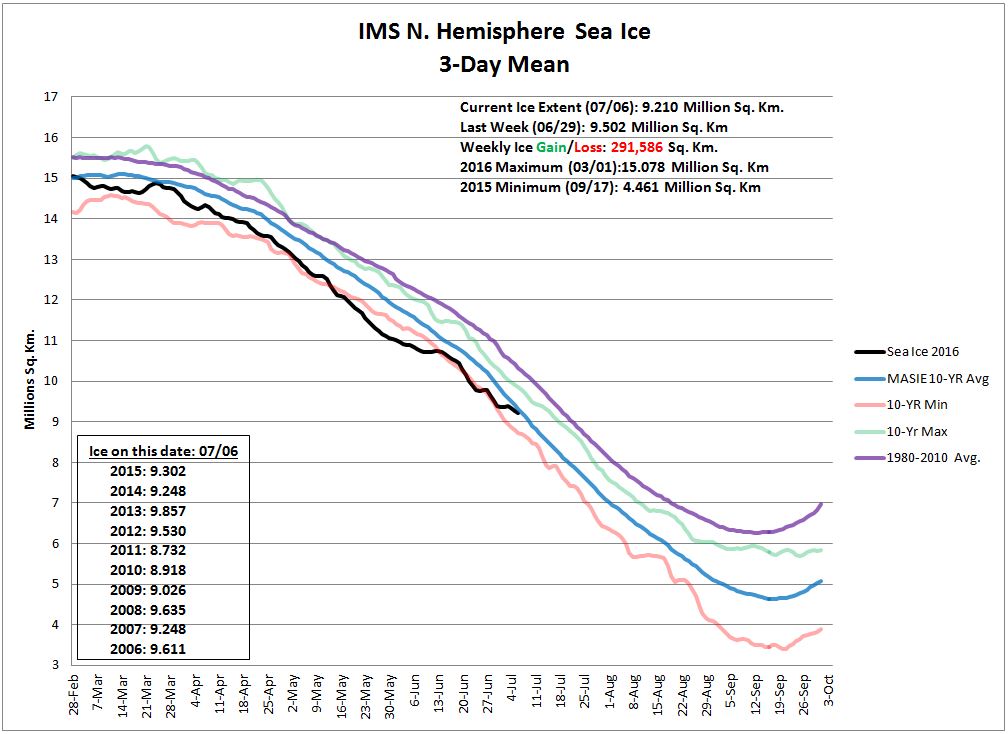 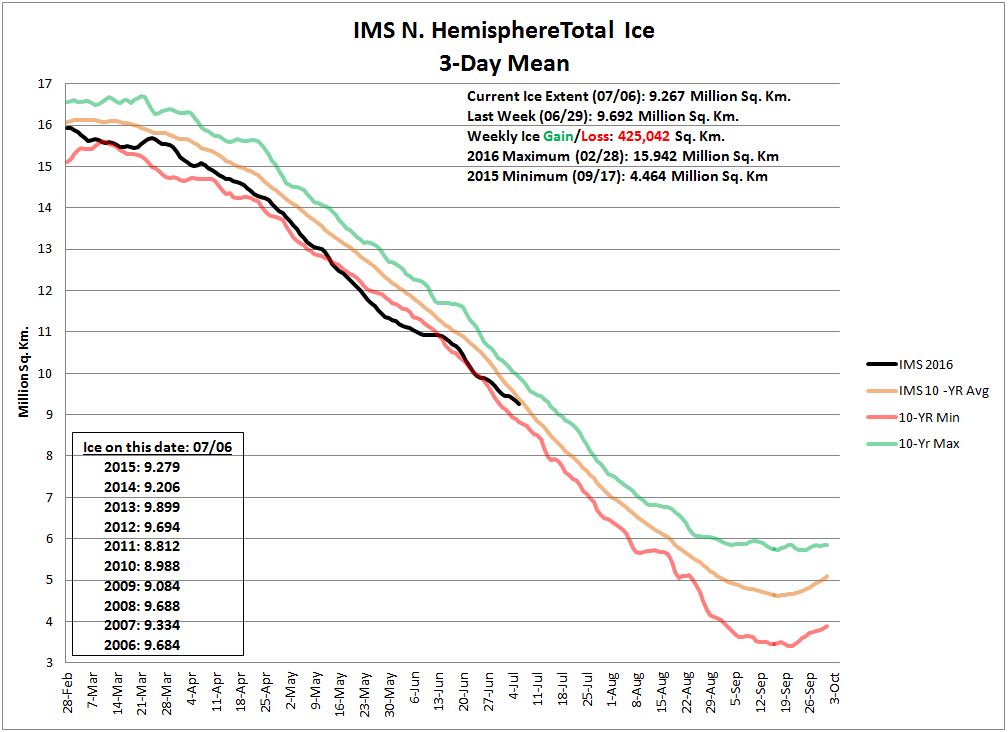 Total IMS Sea and Lake Ice extent coverage calculations are based on all water bodies that have the majority of the surface covered at 4 KM resolution. Total ice coverages are only calculated from March – September of each year to capture the maximum and minimum values for the season. Values represent the entire area of ice covered water bodies over the entire Northern Hemisphere and are calculated in Lambert Azimuthal Equal Area Projection with a WGS84 Datum. The daily total ice extents are calculated from a 3-day running mean to eliminate daily variability and provide a clear trend line.

IMS Sea Ice values are a subset of the IMS Sea and Lake Ice extent that is geographically bounded over the same extent as the NIC Arctic Daily Ice edge and NIC sea ice charts (see http://nsidc.org/data/docs/noaa/g02172_nic_charts_... for geographic extent documentation). The same 3 day running mean values, time intervals, and projection used for the Total IMS Sea and Lake Ice Extent are applied for calculations of the IMS Sea Ice Extent values.

Further data can be found on the NOAA Artic Theme Page.

Snow and ice cover over the Northern Hemisphere is derived from combined observations of METOP AVHRR, MSG SEVIRI, GOES Imager and DMSP SSMIS.

The algorithm is fully automated and operational. 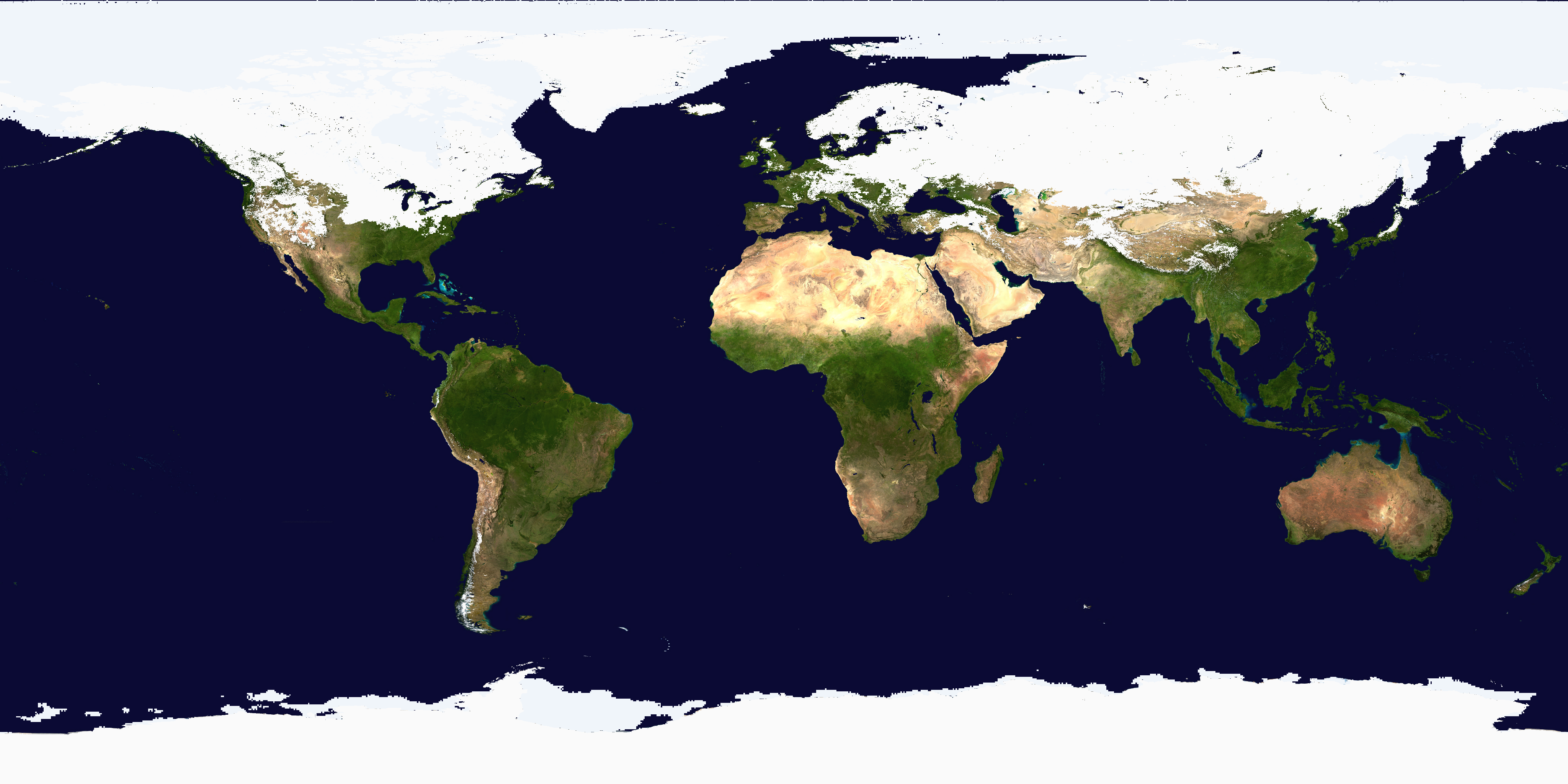 When air temperature falls below freezing (0°Celsius), the water droplets in clouds harden into ice crystals. Such crystals may grow into large, lacey snowflakes; or they may stick together to form odd-shaped clusters of ice crystals. When they grow heavy enough, the ice crystals fall to the ground as snow. If the ground temperature is also below freezing, the snow can build up into a bright white blanket covering the surface. Snow cover is an important part of Earth's environment. Because it reflects most of the sunlight that hits it, snow helps to cool Earth's surface. Many areas of the world rely on snowmelt for drinking water and water for their crops. So scientists monitor where and how much of Earth's landscape is covered by snow.

Snow is precipitation that forms from water vapor in the atmosphere where temperatures are below 0°Celsius. Where the ground temperature is also below freezing, snow can accumulate into a bright white layer of snowpack covering the surface. Such snowpack plays a major role in supporting life on Earth. Most of our planet's fresh water is contained in ice sheets and glaciers. Snowmelt provides water for drinking and irrigating crop fields. Snowmelt also moisturizes soil and reduces the risk of wildfire. Too much snow, however, can lead to springtime floods when the snowpack melts.

Snow and ice play an important role in regulating climate. As anyone who has forgotten sunglasses on a sunny day of skiing knows, snow and ice reflect most of the light they receive. Snow typically reflects 80 percent or more of the Sun's light, much greater than the 10 or 20 percent reflected by bare ground. The highly reflective nature of snow and ice is a critical factor in Earth's balance of incoming and outgoing radiant energy.

In climate terms, snow cover is important because it changes Earth's surface reflectance. The highly reflective nature of snow combined with its potential to cover large areas of our world make it an important factor in Earth's energy balance. Typically, snow covers more than 40 percent of the Earth's land surface in the Northern Hemisphere during the winter months, and reflects up to 80 or 90 percent of the incoming solar energy, compared to the 10-20 of solar energy that bare ground reflects.

The cryosphere which are areas covered by ice, snow, glaciers, or permafrost is an extremely dynamic part of our global system. Changes in seasons & climate bring great changes to the Earth's cryosphere.