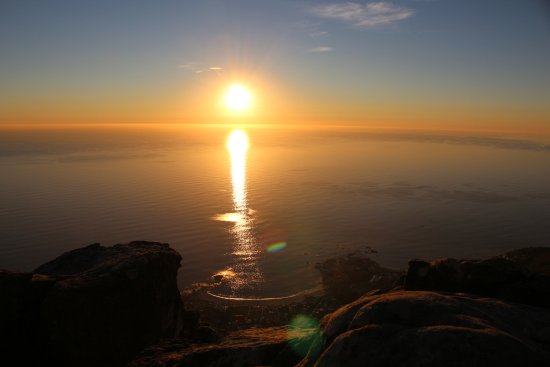 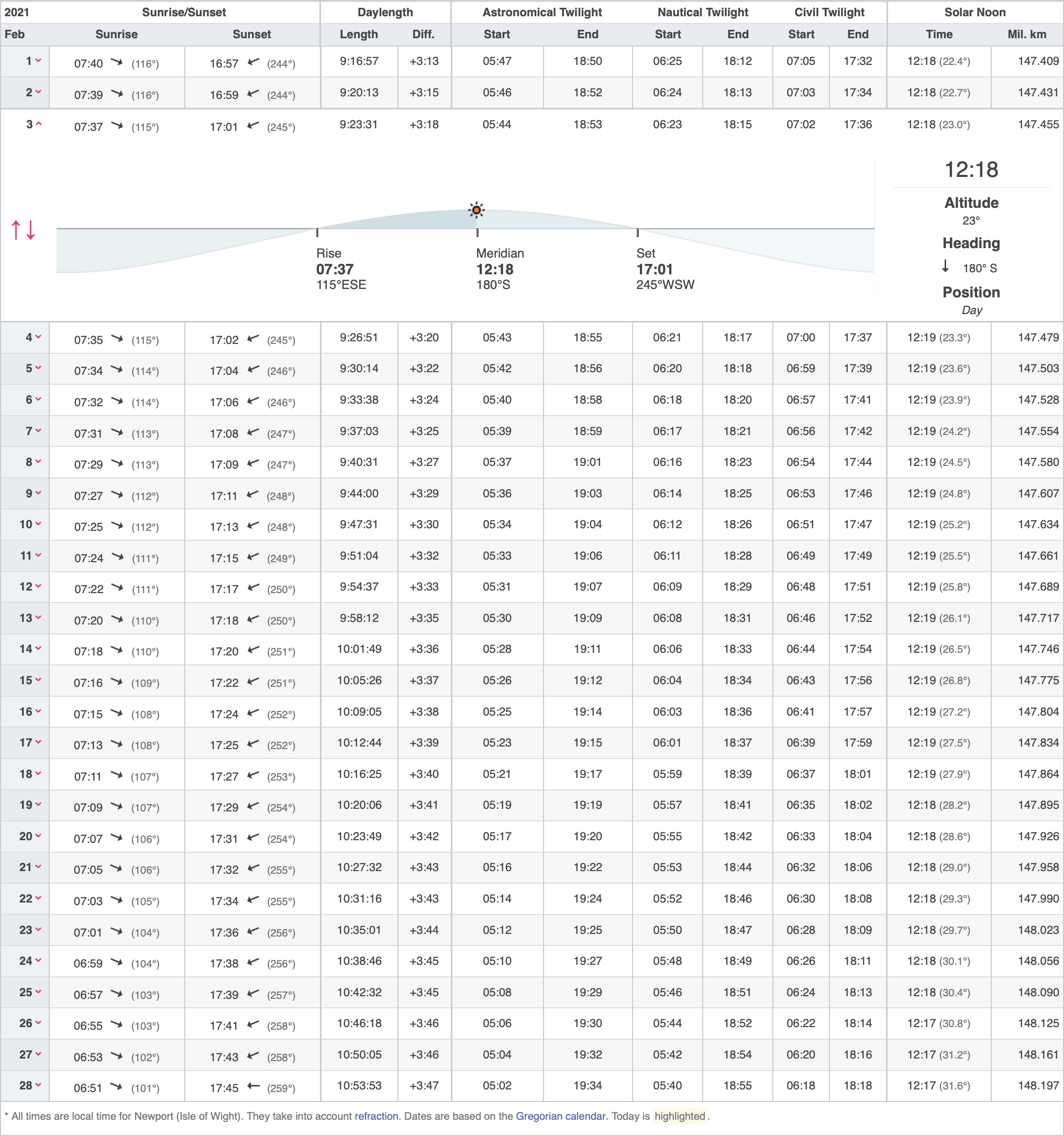 Core Data at a Glance

The yellow band at the top contains the main Sun information for your chosen location, including:

The table below the Yearly Sun Graph gives even more detailed information about the Sun's movements in a specific month and year.

Each row in the table shows data for the date specified. 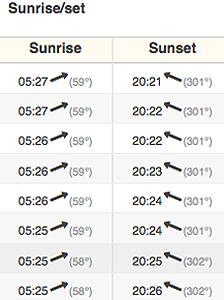 The “Sunrise/set” column with azimuths

The Sunrise/Sunset column shows the time when the Sun rises and sets. The arrows and angles show the azimuths (horizontal headings) of sunrise and sunset. Sunrise and sunset are the times when the upper edge of the Sun's disc touches the horizon.

The times for sunrise and sunset are based on the ideal situation, where no hills or mountains obscure the view and the flat horizon is at the same altitude as the observer. If the horizon in the direction of sunrise or sunset is at a higher altitude than that of the observer, the sunrise will be later and sunset earlier than listed. The reverse is also true: on a high mountain with the horizon below the observer, the sunrise will be earlier and the sunset later than listed.

Technically, sunrise and sunset are calculated based on the true geocentric position of the Sun at 90°50' from the zenith position (directly above the observer).

The azimuth displayed is the horizontal direction of the Sun at sunrise and sunset. As on a compass, the azimuth is measured in degrees, with 360 in a full circle, counted in a clockwise direction from north. North has an azimuth value of 0 degrees, east is 90 degrees, south is 180 degrees, and west is 270 degrees. A small arrow is displayed to indicate the map direction where the Sun will rise or set (for a map where north is upward).

Since the times used for the sunrise and sunset calculations are also used for the azimuth calculation, the actual height of the horizon and refraction as described above can influence the real direction where the Sun rises or sets.

Because of rounding, there may be a 1-second discrepancy between the Length and Diff. values.

The three twilight columns show the start and end times for astronomical twilight, nautical twilight, and civil twilight. Each start time refers to dawn, and the end times occur at dusk.

The start and end times for each phase are grouped together, so the times are not listed in a chronological order. 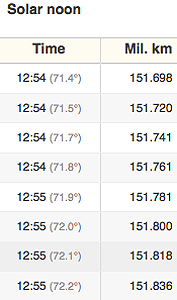 The “Solar noon” Column with Altitudes

This column shows the time of solar noon as well as the Sun's maximum altitude and its distance from Earth. Solar noon refers to the point in time when the Sun passes the meridian, i.e. the longitude of the location. This means that it stands directly north, overhead or south as seen from the selected location. It is the time of day when the Sun reaches its highest point in the sky (except near the South and North Poles where the altitude increases or decreases all day and night).

The Time column shows when solar noon occurs on that day, in local time. Its maximum altitude is displayed in brackets next to the time. This value refers to the altitude of the Sun's center above the ideal horizon at that moment. The altitude takes into account typical refraction in the Earth's atmosphere. If the Sun is below the horizon all day, the altitude is labeled below.

The distance to the Sun does not have as great an impact on the seasons as the tilt of Earth's axis.

Times are rounded to the nearest minute and should generally match closely with those listed in the annual Astronomical Almanac published jointly by H.M. Nautical Almanac Office in the U.K. and the Naval Observatory in the U.S.

A sample set of 150 records consisting of times for sunrise, sunset, and start and end times for civil, nautical, and astronomical twilight was compared with times listed in The Astronomical Almanac for 2007. Only two differed, both by only one minute, which means that just over 1.3 percent were different in that sample set.

Because times are calculated in local time, there is a chance that future times may be wrong, as changes might be made to dates of DST or in the local time zone.