Lightning is a giant electrical spark and is caused by the separation of electrical charge in a thunderstorm. The mechanism of charge separation is still poorly understood but there now seems little doubt that ice particle collisions are involved and the conditions favorable to ice particle collisions are strong updrafts which invigorate a thunderstorm's ice factory. Charge separation by particle collisions occurs until the voltage difference in the cloud reaches 10 to 100 mega volts and the local electric field reaches several hundred kilovolts per meter. The latter field is the approximate dielectric strength of the thundercloud medium and its attainment is required to initiate lionization, the initial stage of the large spark that is lightning.

All kinds of lightning (cloud-to-cloud, cloud-to-ground, positive, and negative strokes) are detected by our Boltek LD-250 detector and with the use of Nexstorm™ to perform the calculations this information gets plotted on a map.. Additionally, two special stroke types, the compact intercloud discharge and the leader are detected from nearby storms as well.

How far away can it detect lightning depends on the intensity of the storm and the kind of terrain between our detector and the storm. Also, we get better "reception" at night. Stronger storms can be detected further away and flat terrain between us and the storm gives us a better chance of "seeing" the storm. Generally, storms within 300 miles will be detected easily. Intense storms have been detected over 600 miles away.

When the Lightning Detector detects lightning stokes it may take a while to get the position correct, this is due to it recalculating each time. The more strokes the better the position.

The information is provided for general interest. It cannot be used for the protection of life or property.

Cloud-to-ground lightning is the most spectacular lightning. It is the lightning bolt we see reaching from the sky to the ground forming a bright, usually forked bolt of light. The ground is the most conductive object that will release the most energy. This form usually occurs from the base of a negatively charged cloud. Sometimes there is a rarer form that happens from the the positive charge in the top of the cloud to the negative charge on the ground known as a positive flash. Only about 20 percent of all lightning reaches the ground. Over the entire Earth there are over 100 strikes every second.

Cloud-to-ground lightning is the most damaging and dangerous form of lightning. The great majority of ground flashes are negative, but the most powerful and most dangerous are the positive ground flashes that can also produce sprites in the mesosphere. Positive flashes occur in the decaying phases of large thunderstorms and in the very active stages of severe storms. Most cloud-to-ground lightning strikes come from the negatively charged bottom of the cloud traveling to the positively charged ground below.

Some meteorologists believe that positive lightning strikes indicate storms that are more likely to spin out tornadoes.

In the active stages of severe storms, intra cloud flashes can outnumber ground flashes by 10-100 to one.

The map shows the average annual number of lightning flashes per square kilometer across the world. [Image from NASA] 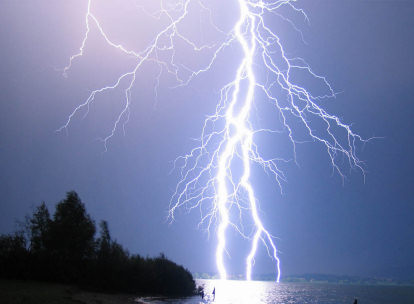 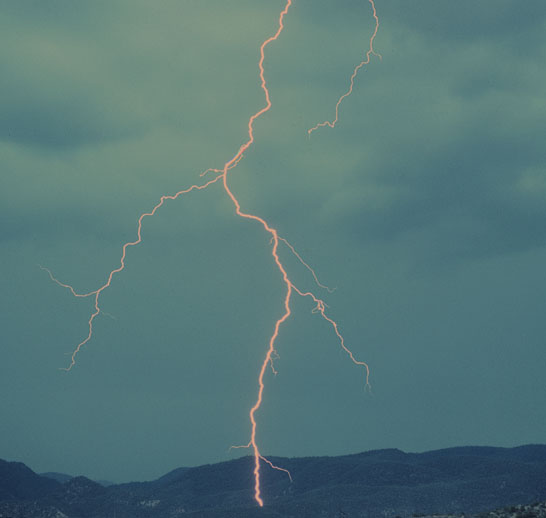 A typical lightning flash lasts about a quarter of a second and consists of 3 or 4 individual discharges called strokes. Each stroke lasts a few ten thousandths of a second, although the visual appearance is longer. The "flicker" sometimes observed in lightning is due to seeing the actual strokes making up the flash.

A lightning stroke begins with a faint predischarge, called the leader, which goes from the cloud to the ground. The leader establishes a path for the highly luminous return stroke (what you really see) which propagates from the ground up to the cloud. The first stroke of a flash is usually preceded by a "stepped leader", so called because it appears to progress in discrete steps (about 100 segments, each 50 m long) from cloud to ground. The subsequent strokes are preceded by a "dart leader" which smoothly follows the path of the previous return stroke (and is about 10 times faster). 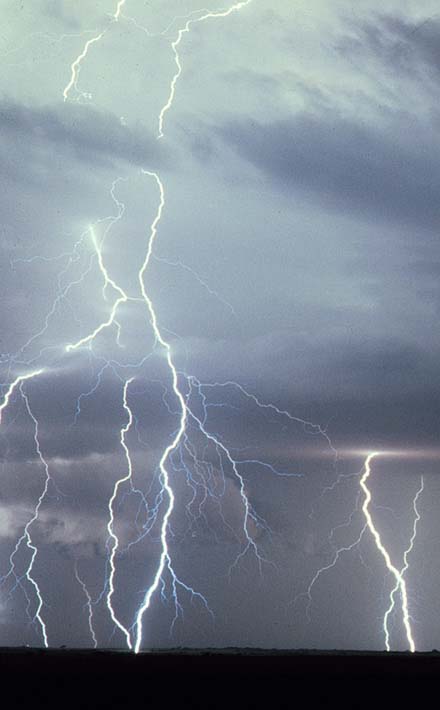 Most lightning strikes occur either at the beginning or end of a storm.

A cloud-to-ground lightning channel can be 2 to 10 miles long.

Voltage in a cloud-to-ground strike is 100 million to 1 billion volts.

We use NEXSTORM software with our Storm detection hardware.